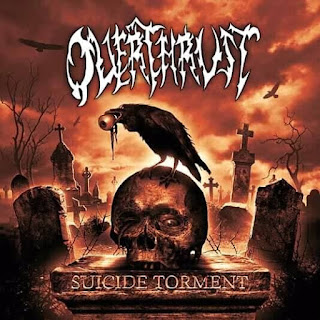 Indian River Music Company is proud to introduce the brutal sounds of Overthrust and their latest release “Suicide Torment”.

With a grassroots in-your-face approach to their sound, “Suicide Torment” delivers 6 guttural sonic assaults showcasing the band’s true to genre sound. The album was recorded in Gaborone, Botswana and mixed/mastered by Jason Banning at Indian River Music Company in Chuluota, FL. Tracks like “Territory Of Death” and the title track “Suicide Torment” hit your ears right of the bat with the sonic power of a thousand hammers, while “Loudest Silence” tells an audible story going, from calm to storm, from your speakers to the deepest corners of your mind.

Formed in 2008 in Ghanzi, Botswana, Overthrust has earned a reputation as one of the best African metal acts by delivering a sonic attacked rooted in old school death metal reminiscent of classic acts such as Death, Morbid Angel and Obituary. Overthrust toured Germany and Switzerland for the first time in 2016 and played both Wacken Open Air and the International Sommerfestival in Hamburg. The band has been featured in documentaries on Netflix and YouTube as well as CNN.